Updated advice regarding drilling works and access to the site

Further drilling work on the Northern Regional Prison site has been suspended due to weather/site conditions that are not conducive to continuing work occurring at this time.

Given the wet condition of the ground it is not possible to proceed with further works this week in a manner that minimises the impact on the site.

The restrictions for accessing the site advised earlier today are not necessary when no work is underway and therefore these restrictions have been lifted for the time being.

The Department of Justice continues to take all necessary precautions to ensure we are complying with the Works Authority provided.

Works will recommence at a future date when weather and ground conditions permit and the drilling team are available.

Access to the portion of the Brushy Rivulet Crown Land to be used for the Northern Regional Prison must be restricted while drilling works are occurring.

The contractors are have statutory obligations to ensure a safe worksite and therefore, normal public access to the 16 hectare area earmarked as the prison site will be restricted to only the contractors, consultants and appropriate Department of Justice employees for the duration of the works.

In addition to stationary functions while drilling, the drilling vehicles and the support vehicles will be moving around the site, so there is a need to ensure that safety on the site is carefully managed.

Therefore, casual entrance to the work area (the 16 hectare area on the map below) cannot be permitted.

The drilling contractor has placed signage about access to the worksite at the entrance to the site.

Access to the balance of the site is not affected by the drilling works, however care should be taken to ensure no encroachment on the 16 hectare work area or the 500 metre “no disturbance” zone for the wedge-tailed eagle.

The restricted access will be in place until Saturday, 24 October 2020. 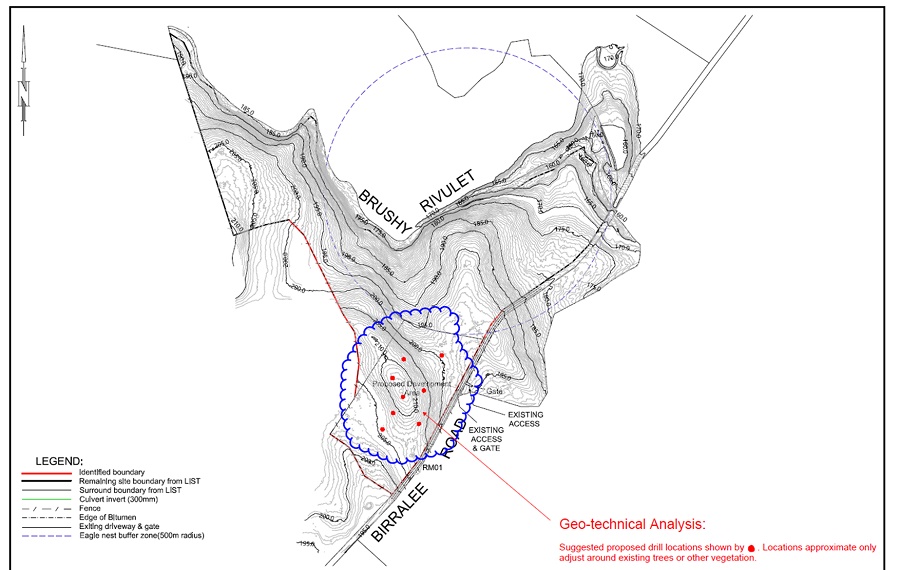 What is happening on site?

Due diligence investigations are continuing on the Northern Regional Prison site in Birralee Road at Brushy Rivulet.

Geotechnical investigations are currently underway and, as part of this work, drilling of core investigation holes will soon commence to enable soil and rock core testing.

This will occur over a period of up to two weeks from Monday 19 October.

A water truck, drilling rig, as well as other staff and equipment will be on the site during these works.

It is important to note that no work will be undertaken within the 500 metre no disturbance zone that is in place for the duration of the wedge-tailed eagle breeding season.

Tasmania currently has its main prison facilities in the south of the State.

Almost half of the current prison population is from the north or north-west region of Tasmania. Families and support networks currently have to travel longer distances to visit them in the south of the State and many are not able to do so regularly. A new prison will alleviate some pressure on these groups.

The new Northern Regional Prison will be constructed in two stages and on completion will accommodate up to 270 prisoners and remandees.  Stage one of the prison to house 140 prisoners is due to be completed in the next five years, with full completion in 10 years.

The prison will employ hundreds of people during construction and will employ around 250 people once in full operation.

The Tasmanian Government is investing $270 million into this project. The project is expected to create hundreds of jobs during construction with flow on benefits to the Tasmanian community providing opportunities for business to support its operation.

Once the facility is fully operational, the Department of Justice will support the local economy through the use local contractors and suppliers, wherever possible.

Following consultation with the residents of Westbury and broader Meander Valley community, the previously preferred site will no longer be pursued.

The Social and Economic Impact Study

SGS Economics and Planning (SGS) were engaged to prepare a Social and Economic Impact Study (SEIS) in relation to the proposal to build the Northern Regional Prison at the previously preferred site.

The SEIS combines an Economic Impact Assessment with a Cost Benefit Analysis to present a high-level socio-economic analysis of the proposal, particularly for the surrounding towns and communities.

The study also includes the results of a phone survey of residents in the Westbury postcode area, a mail survey of Meander Valley residents; and a survey of businesses located in the Valley Central industrial precinct.

The SEIS concludes that the proposed development will have the following impacts, in present value terms, on the Northern region of Tasmania:

The SEIS shows that the proposed Northern Regional Prison will also generate a range of other important benefits to the north and north-west of Tasmania, including improved inmate rehabilitation driven by increased connectedness between inmates and their families during incarceration, which will lead to a reduction in crime and an economic benefit of $29.4 million to the north and north-west regions, according to the study.

The telephone survey of the Westbury postcode area included calls to a random selection of 333 residents. Respondents were asked to rate their level of support for the proposal with 39.1 per cent supporting or strongly supporting it and 43.9 per cent either opposing or strongly opposing it, while 17 per cent indicated they felt neutral.

A mail survey was posted to 8,581 households across the Meander Valley Local Government Area with 2,226 surveys returned. Respondents were asked to rate their level of support for the proposal with 50.3 per cent supporting or strongly supporting it, and 36.5 per cent either opposing or strongly opposing it, while 13.2 per cent indicated they felt neutral.

Go to our FAQ's page for more information about the new Northern Regional Prison.